The car-sharing company Car2Go has temporarily suspended operations in Chicago following the reported theft of 100 cars off its platform. While the exact details are hazy, it appears that as-of-yet undetermined individuals fraudulently used the company’s app to gain access to Car2Go vehicles and then make their dastardly escape.

News of the theft was first reported by CBS Chicago investigative reporter Brad Edwards, who tweeted that “[as] many as 100 Mercedes / high-end cars missing / stolen,” and that “[many] being used to commit crimes.”

When reached for comment, a Car2Go spokesperson insisted that there was no hack, but confirmed that there is a pretty big problem.

“Since this is an ongoing investigation, the only thing I can confirm right now is that there was no ‘hack,'” the spokesperson told Mashable via email. “This is an instance of fraud, isolated to Chicago, and we are currently working with law enforcement. None of our member’s personal or confidential information has been compromised.”

Well, at least there’s that.

When pressed, the spokesperson confirmed that, yes, “100 vehicles were compromised.”

We reached out to the Chicago Police Department for additional details, but received no response as of press time. However, Edwards tweeted a statement from police that helps fill in some of the gaps.

“The Chicago Police Department was alerted by a car rental company that some of their vehicles may have been rented by deceptive or fraudulent means through a mobile app,” read the statement in part. “Due to the information provided by the company, numerous vehicles have been recovered and persons of interest are being questioned.” 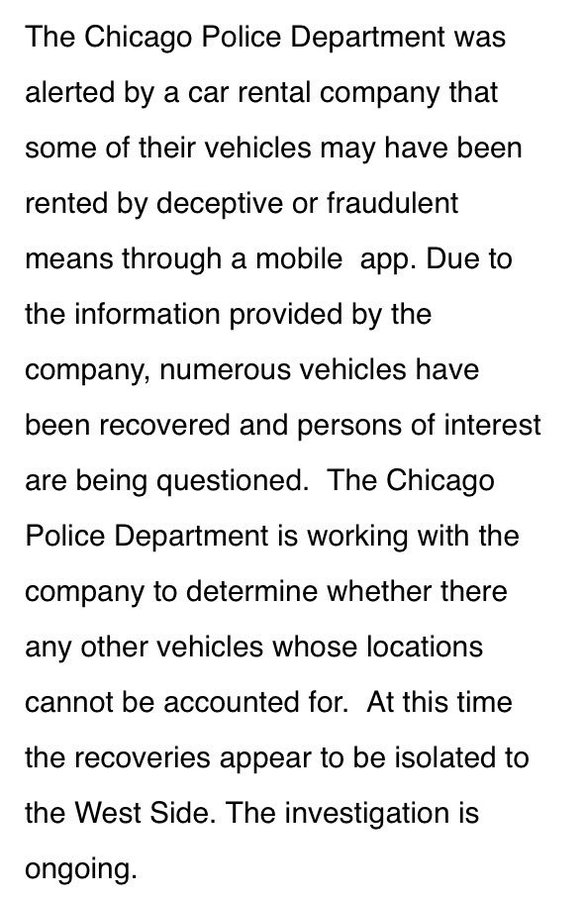 A question from Mashable about what type of cars were stolen — Car2Go offers Mercedes-Benz in addition to smart cars — went unanswered by the company spokesperson. But we have a hunch.

So be on the lookout for a Car2Go-branded Mercedes-Benz or two cruising the streets of Chicago, and keep in mind that they may represent the fruits of the sharing economy — just not the kind we’ve come to expect.

Update, 8:40 a.m. PT, 4/18/2019: SHARE NOW, the parent company of Car2Go, said it’s “actively recovering all of our vehicles and continuing to work closely with The Chicago Police Department as they move forward with their investigation. We will provide additional updates, including information about the reinstatement of our service, as soon as we can.”

Apple One subscription bundles get a release date

5 ways to charge your new iPhone 12

We are giving away two unlocked Galaxy S10 phones

Apple selling One Drop blood glucose monitors in its stores

Why your iPhone and Android phone will cost more in 2019

Next iPhone may swap Lightning port for USB-C, have three rear cameras

What really happens if Republicans get rid of Section 230