Home Apple Apple is killing its App Store affiliate program
Share on Facebook
Tweet on Twitter
In a move that will shake the mobile app ecosystem, Apple has announced it will be ending it’s affiliate program for apps.

Starting Oct. 1, Apple will remove iOS apps, Mac apps, and all in-store app purchases from its affiliate program. The company will no longer payout commissions to third-parties who send Apple sales for any and all of those items. All other iTunes store content, such as movies, TV shows, music, and books, will remain part of the affiliate program.

According to Apple, the decision to remove apps from its affiliate program is due to its revamped and relaunched App Store, complete with real human editors, which focuses on discover of news and popular apps.

Apple broke it down in an email announcement to its affiliates:

On social media, many people are outraged. The app affiliate program enabled many third-party, completely independent from Apple, websites to write about and honestly review iOS and Mac apps. These outlets — websites like AppShopper, Touch Arcade, and AppAdvice — were able to sustain regular coverage and app reviews due in major part to the money made from the apps purchased from their affiliate links. 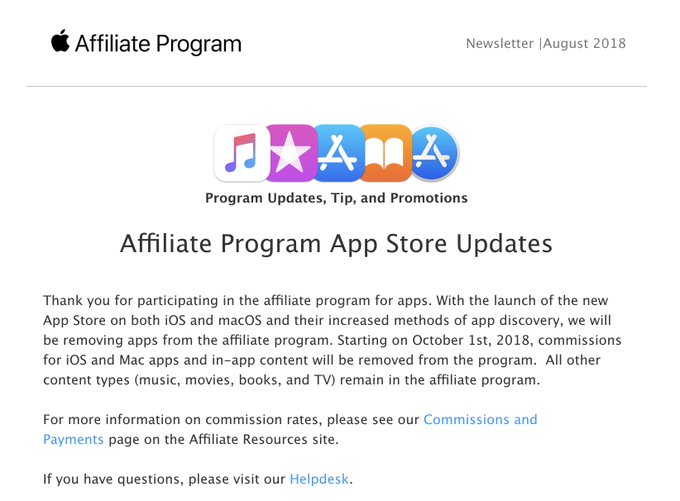 I genuinely have no idea what TouchArcade is going to do. Through thick and thin, and every curveball the industry threw at us, we always had App Store affiliate revenue- Which makes a lot of sense as we drive a ton of purchases for Apple. I don’t know how the takeaway from this move can be seen as anything other than Apple extending a massive middle finger to sites like TouchArcade, AppShopper, and many others who have spent the last decade evangelizing the App Store and iOS gaming.

And TouchArcade’s editor-in-chief was quick to point out, as did others, that these websites aren’t the only ones who would be hurt by this move from Apple. Indie iOS app and game developers would feel the pain too.

Apple just killed the main source of income for all third-party reviewers of iOS apps and games, stating openly that they’d rather just curate and promote everything themselves in the “new App Store.” Other forms (books, movies, music): unaffected! https://toucharcade.com/2018/08/01/apple-kills-the-app-store-affiliate-program-and-i-have-no-idea-what-we-are-going-to-do/ …

This is sheer vertical-monopolization, cutting off any other source of commentary that they don’t control and choking it to death. I knew the changes were bad for smaller devs last year but now we’re all the way to “just buy what Apple tells you to” https://twitter.com/metasynthie/status/871809778833657856 …

Is it just me or does this new App Store redesign look like it’ll just increase the huge gulf beteween haves & have-nots of discoverability?

Apple’s focus on discovery in its App Store may be a move in the right direction, but it will never make up for the coverage lesser known developers get from third party, independent websites. And, on the day Apple becomes the world’s first trillion dollar company, they can certainly afford to keep sharing the 2.5 to 7 percent affiliate commission from its app profits with the very indie websites that drive them sales.

Apple’s iPhone 12 will be late, but not as late as it might’ve been, report says

Apple’s ‘transition’ Mac mini is a sweet deal for developers, but there’s a catch

The Matrix remembered at 20: Keanu classic or cyberpunk snooze?

AT&T TV is a worthy alternative for cord-cutters, but it’s not perfect

Trump takes credit for a 2018 cyberattack on a Russian troll...

The ‘Palm Springs’ memes that perfectly describe life in quarantine

Apple is developing its own LiDAR sensors, talking to potential sensor...